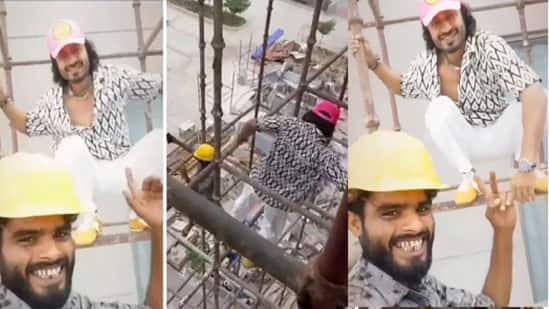 Mumbai: Actor Vidyut Jammwal leaves no chance to surprise his fans with his daring and death-defying stunts. He performed an actual stunt to hit a fan who was working at the construction site.

Vidyut took his Instagram handle and on Friday posted a video showing his courage and affection in meeting a fan and climbing down scaffolding from a balcony. In the video, he can be seen speaking to a construction worker who is sitting on scaffolding at a neighboring construction site while standing on a balcony.

When the fan praised Vidyut’s work, Vidyut asked which of his action films he had seen. Vidyut then assured the fan that no one in movies could pull off stunts like he did in his construction job. He asked the fan if he had his phone with him and was ready to take a picture with him. The person with the camera told Vidyut not to jump onto the scaffolding from the balcony.

In response, Vidyut declared that he adored his followers and was keen to meet them. The actor replied, “I love you meri Jaan (I love you my life)” as the fan praised Vidyut for giving him the opportunity to meet him. The fan kissed Vidyut’s hand, and the actor did the same in return by kissing the fan’s hand. Captioning the video, he wrote, “NORMAL IS BORING…#TheRealStuntMen.”

Fans praised Vidyut for showing his love for his fans on social media, calling him a man with a “heart of gold.”

One fan commented: “That’s why we appreciate you every time. So humble.” Another wrote, “Bhai meko to lagta hai maut (death) aapase darta hoga ulta (I think even death must be afraid of you).”

Meanwhile, on the working front, Vidyut is ready to release Khuda Haafiz Chapter 2 Agni Pariksha, which will hit theaters on July 8, 2022. He also has IB 71 and Sher Singh Raana in his pocket.

Happy Birthday Mylswamy Annadurai : Everything You Need to Know About the Indian Moon Man
Next Article