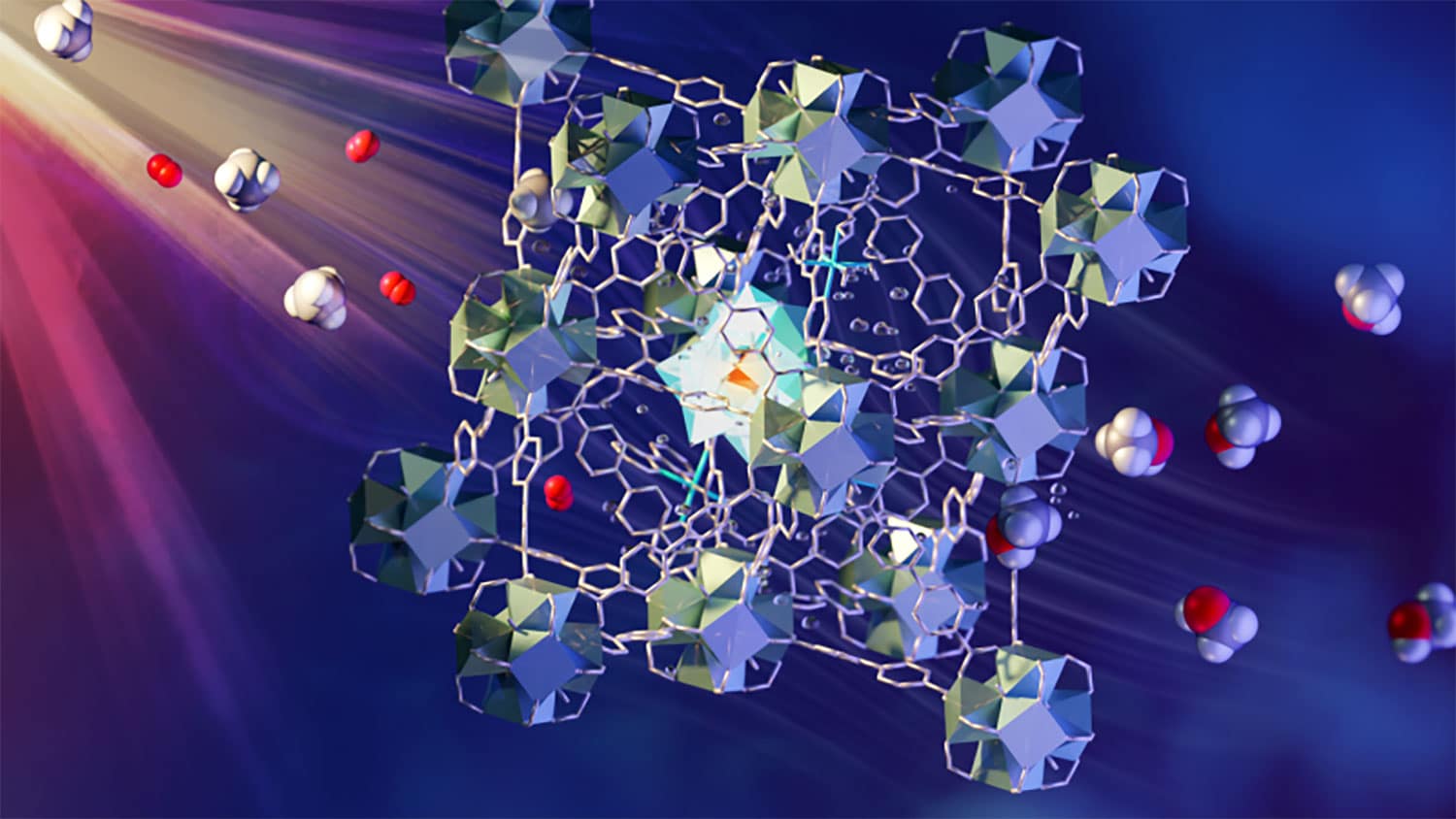 
Natural gas, which consists primarily of methane, has a relatively low energy density under ambient conditions. The partial oxidation of methane to methanol increases energy density and drives the production of numerous chemicals. An international team of researchers led by scientists from the University of Manchester has developed a rapid and economical method for converting methane or natural gas into liquid methanol at ambient temperature and pressure.

Scientists used visible light to drive the conversion under continuous flow over a photocatalytic material. Using neutron scattering on the VISION instrument, they observed how the process works and how selective it is.

The process involves a continuous flow of methane/oxygen saturated water over a novel metal-organic framework (MOF) catalyst. Various components in MOF play a role in absorbing light, transferring electrons, and activating and combining methane and oxygen. The liquid methanol is easily extracted from the water. This process has been widely regarded as “a holy grail of catalysis”.

The difficulty of weakening or breaking the carbon-hydrogen (CH) chemical bond to introduce oxygen (O) atoms to form a C-OH bond has been a major obstacle in the conversion of methane (CH4) to methanol (CH3OH). Steam reforming and syngas oxidation are typically the two phases of traditional methane conversion processes that require high temperatures and pressures and are energy intensive, expensive and inefficient.

The newly developed process is fast and economical. It uses a multi-component MOF material and visible light to drive the conversion. A layer of MOF granules is passed through a stream of CH4- and O2-saturated water under the influence of light. The MOF consists of various design elements that are firmly positioned in the porous superstructure. Together they absorb light to create electrons, which are then transferred to oxygen and methane in the pores to create methanol.

Sihai Yang, Professor of Chemistry at Manchester and corresponding author, said: “To greatly simplify the process, when methane gas is exposed to the functional MOF material containing mono-iron hydroxyl sites, the activated oxygen molecules and light energy promote the activation of the CH bond in methane to form methanol. The process is 100% selective – meaning there is no unwanted by-product – comparable to methane monooxygenase, the natural enzyme for this process.”

The studies showed no loss of performance when the solid catalyst was isolated, cleaned, dried and reused for at least ten cycles or approximately 200 hours of reaction time.

The novel photocatalytic method is comparable to how plants convert light energy into chemical energy through photosynthesis. Plants absorb carbon dioxide and sunlight through their leaves. These substances are then converted into sugar, oxygen and water vapor by a photocatalytic process.

Martin Schröder, Vice-President and Dean of the Faculty of Science and Technology in Manchester and corresponding author, said: “This process is called the ‘holy grail of catalysis’. Instead of burning methane, it might be possible to convert the gas directly into methanol. This high quality chemical can be used to produce biofuels, solvents, pesticides and vehicle fuel additives. This new MOF material can also facilitate other types of chemical reactions, serving as a kind of test tube where we can combine different substances to see how they react.”

Yongqiang Cheng, instrument scientist at ORNL Neutron Sciences Directorate said: “Using neutron scattering to acquire ‘images’ on the VISION instrument first confirmed the strong interactions between CH4 and the mono-iron hydroxyl sites in the MOF, which weaken the CH bonds.”

Anibal “Timmy” Ramirez Cuesta, who leads the chemical spectroscopy group at SNS, said: “VISION is a high-throughput neutron vibrational spectrometer optimized to provide information about molecular structures, chemical bonding and intermolecular interactions. Due to their rotation and vibration, methane molecules produce strong and characteristic neutron scattering signals, which are also sensitive to the local environment. This allows us to unequivocally reveal the bond-weakening interactions between CH4 and the MOF using advanced neutron spectroscopy techniques.”

The new conversion method could significantly reduce equipment and operating costs by eliminating the need for high temperatures or pressures and using the energy of sunlight to power the photo-oxidation process. The increased speed of the process and its ability to convert methane to methanol without unwanted by-products will facilitate the development of in-line processing that minimizes costs.